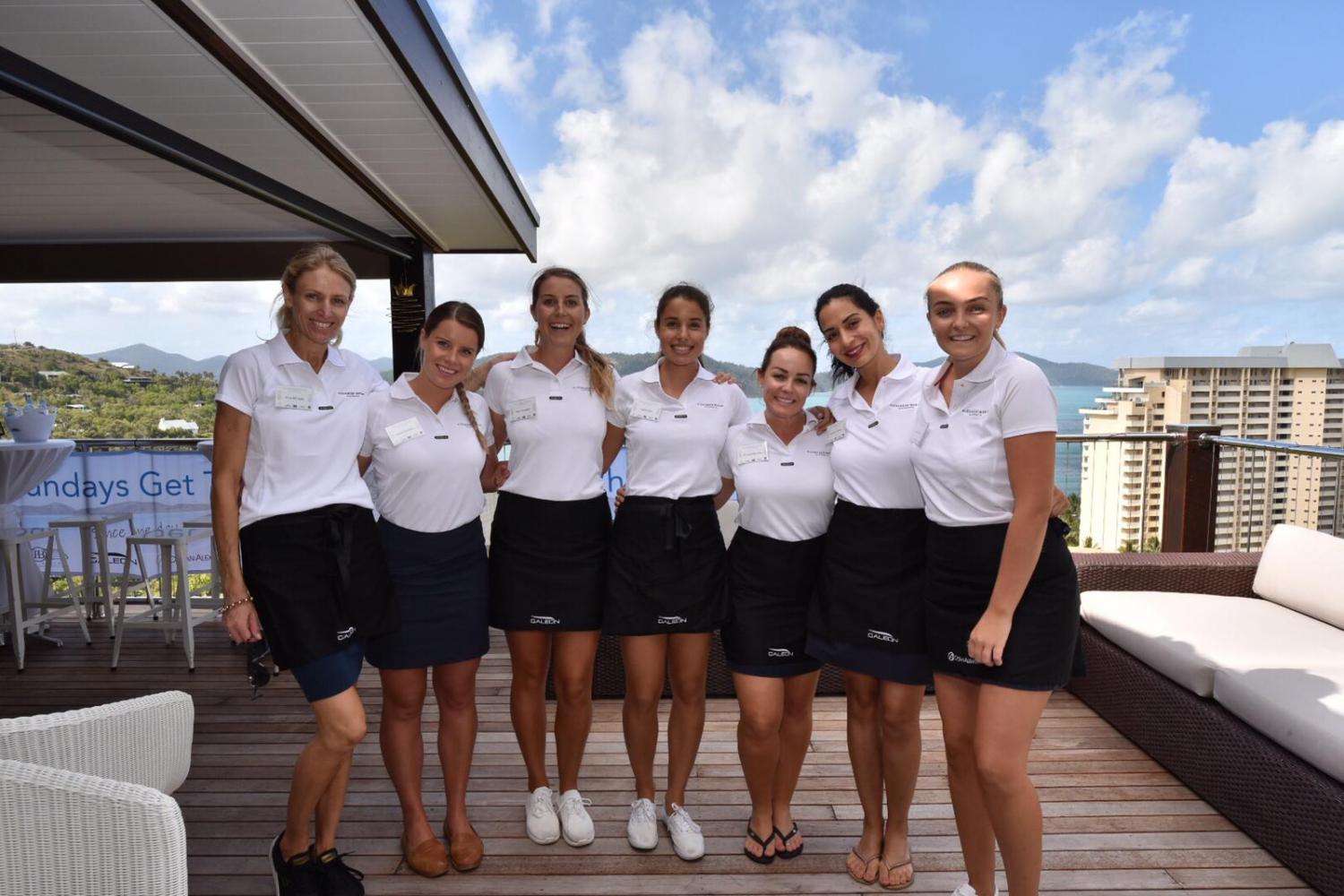 Our guests were greeted by our gorgeous crew with a Bay Breeze Cocktail. 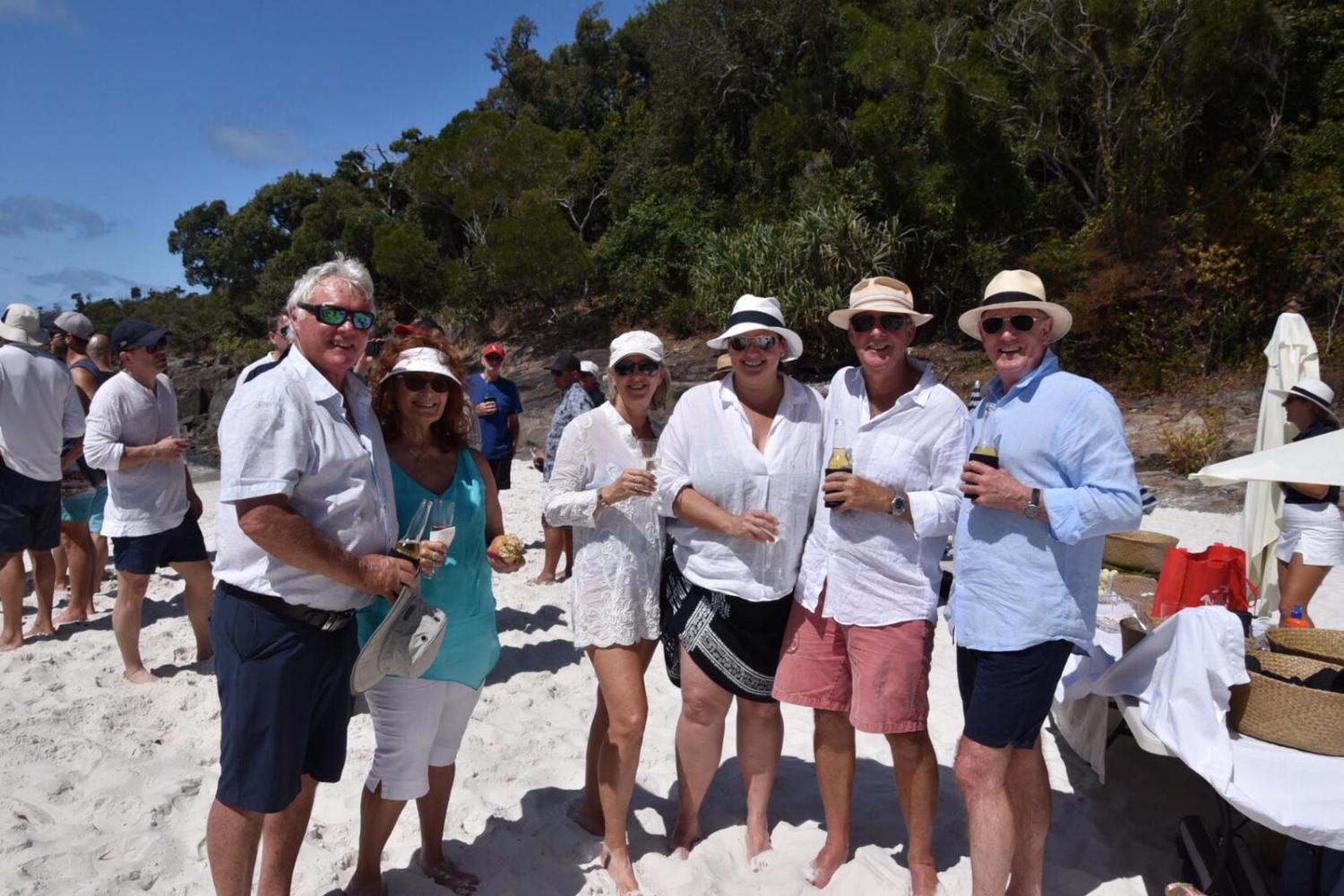 What a glamour day for our fleet to take guests around to the World renowned Whitehaven Beach where we met with guests onboard their vessels for beach day filled with Rose and fresh baguettes. 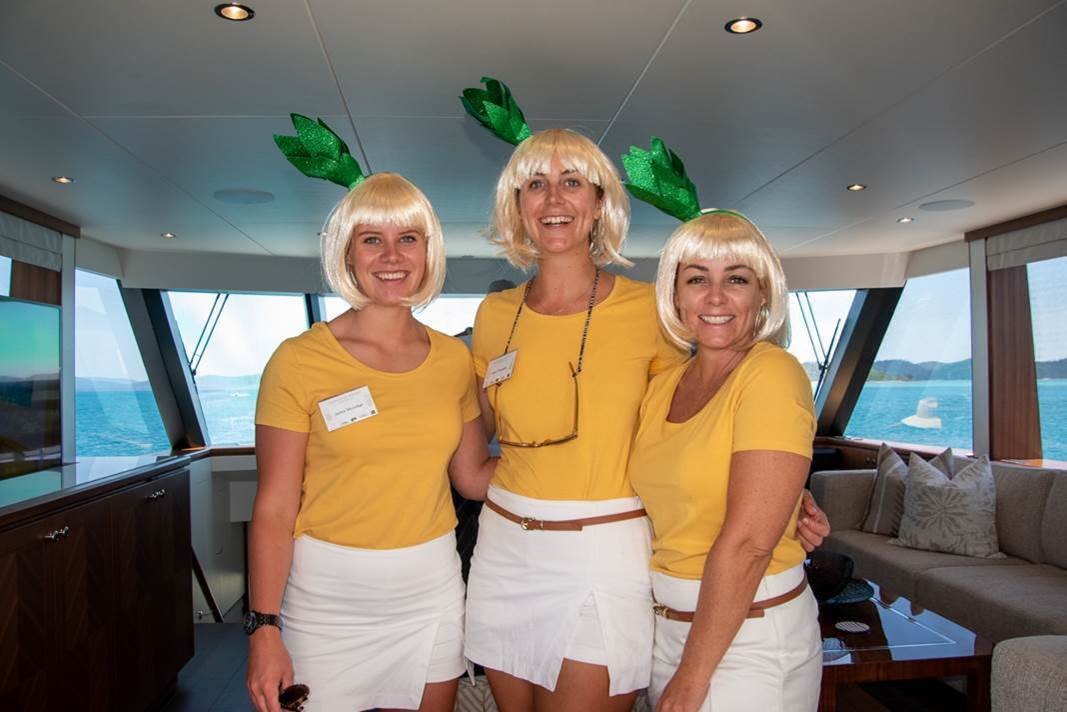 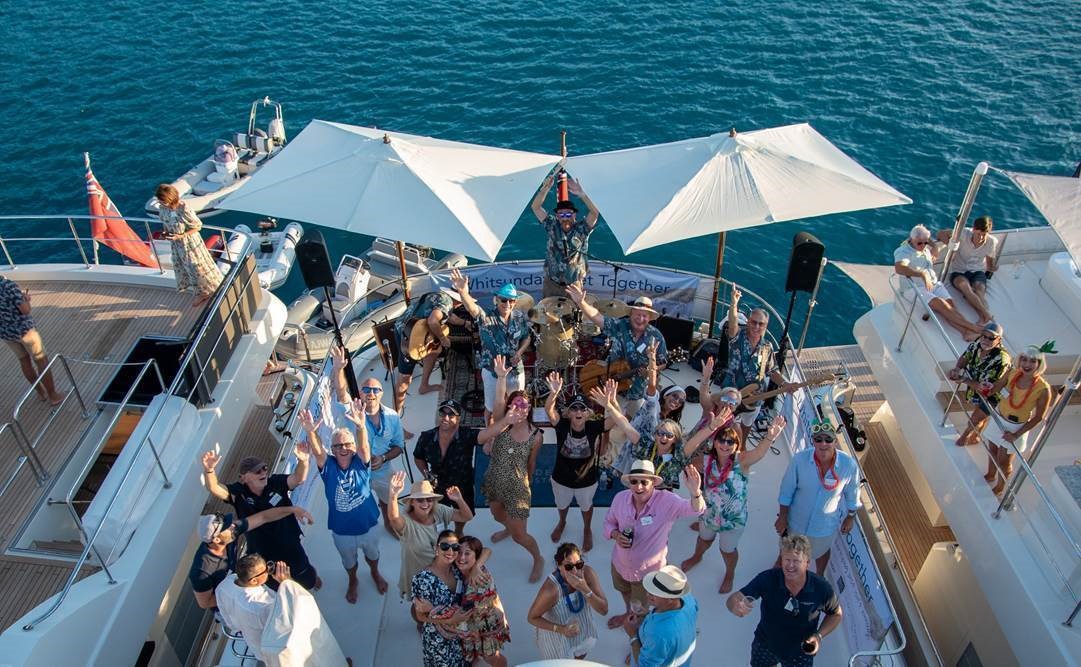 As the sun goes down the dance floor came alive. 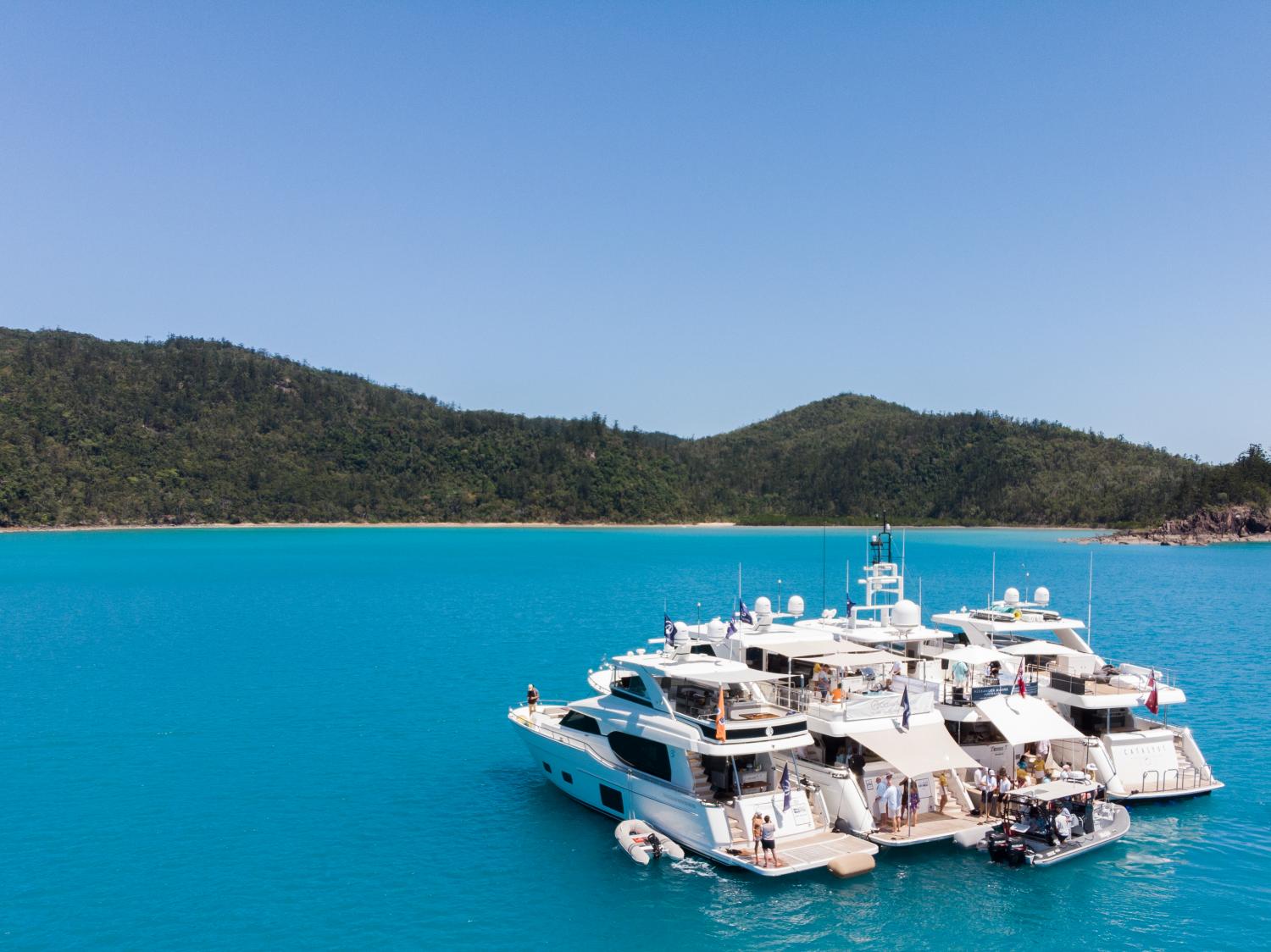 Alexander Marine Australia again hosted its now annual "Whitsundays Get Together" gathering welcoming in excess of 100 customers and invited boating enthusiasts to three days of fun at the beginning of October.   Hamilton Island again acted as base station for the festivities. Many guests arrived in their own boats having been enjoying the Whitsundays cruising season onboard their vessels, while other guests flew in from around Australia such is the growing popularity of the annual gathering.

Friday afternoon saw welcome drinks staged at a private hillside residence with sensational views over Catseye beach and Fitzalan passage to the north, and down over Hamilton Island marina to the west. Back by popular demand the ‘Rock Bottom’ band made its first of two appearances on Friday as the sun set and day became night. A signature cocktail complimented stunning hors d’oeuvres from a dedicated event chef flown in for the weekend to ensure everybody was suitably well fed.

The sensational and always energetic events team from Alexander Marine, in theme at different stages of the weekend, ensured guests wanted for nothing. For some guests it was the first time they had attended, and it was a pleasure to see new connections being made – the common theme being each guest’s love of all things boats.

Saturday was our scheduled beach day, at which time our fleet of Ocean Alexander vessels ferried those guests who arrived by plane around to Whitehaven Beach. Once anchored, guests were transferred ashore by RIB where a beach bar awaited their arrival. Our chef had prepared yet more delicious food for what was an enjoyable day under clear blue skies. Members of the ‘Rock Bottom’ band, themselves boat owners and enthusiasts, took a well-earned day off and chilled out at the beach.

Between our guests they owned a wide selection of vessels from local and international manufacturers. For some guests it was the first time they had been onboard an Ocean Alexander, and its always rewarding to hear the positive comments regarding our unmatched fit and finish from people new to the brand. This same affection is common after doing sea miles on an Ocean Alexander.

Our newly debuted 45 Divergence was the smallest Ocean Alexander model in attendance, and as usual, she turned heads wherever she roamed – while also providing the ultimate fast transfer platform for guests who couldn’t make the scheduled event times and needed a fast transfer to not miss out on all the fun! Our 70e proved to be an excellent entertainer throughout the weekend with guests taking advantage of the multiple entertaining zones including the cockpit, expansive flybridge and foredeck seating. Our 88 Skylounge impressed with her overall spaciousness, and ultra-smooth whisper quiet Skylounge – even at 18 knots on the way back to Hamilton Island to showcase her fast cruise speed capability to a few interested passengers.

Sunday was our Cid Harbour raft up day. Again a flotilla of vessels, the Ocean Alexander fleet included, steamed the short distance north to Cid Harbour from Hamilton Island in glorious weather conditions. On arrival at Cid Harbour the fleet rafted together with the expedition Motor Yacht ‘Texas T’ acting as the anchor vessel and entertainment HQ. As the fine food and cold beverages flowed, the ‘Rock Bottom’ band got underway having positioned themselves aft on the elevated boat deck of ‘Texas T’ – with the rafted vessels providing a great vantage point in which to enjoy the overall spectacle and live music. Our junior shipmates enjoyed a dip in the Ocean Alexander 88 Skylounge spa bath, while the grown up told (sometime tall) stories while new friendships were forged.  Undoubtably the highlight of the day was the ‘Rock Bottom’ band pushing out the tunes as the sun melted into the western skyline, with some party goers now attempting their best dance manoeuvrers…..

One guest described the whole experience as “schoolies for grown up”, while at the same time trying to explain to there guests for the weekend that every weekend in the Whitsundays isn’t this action packed!! For the team at Alexander Marine Australia, its about getting like minded boaties afloat and showcasing our world class Ocean Alexander motoryachts to the growing number of Australian boaters that are taking an interest in our model range while they prepare to transition into new and often larger vessels. And that we did.

See the full photo album from the event here!

Planning for the Alexander Marine Australia 2020 Whitsundays Get Together event is already underway!