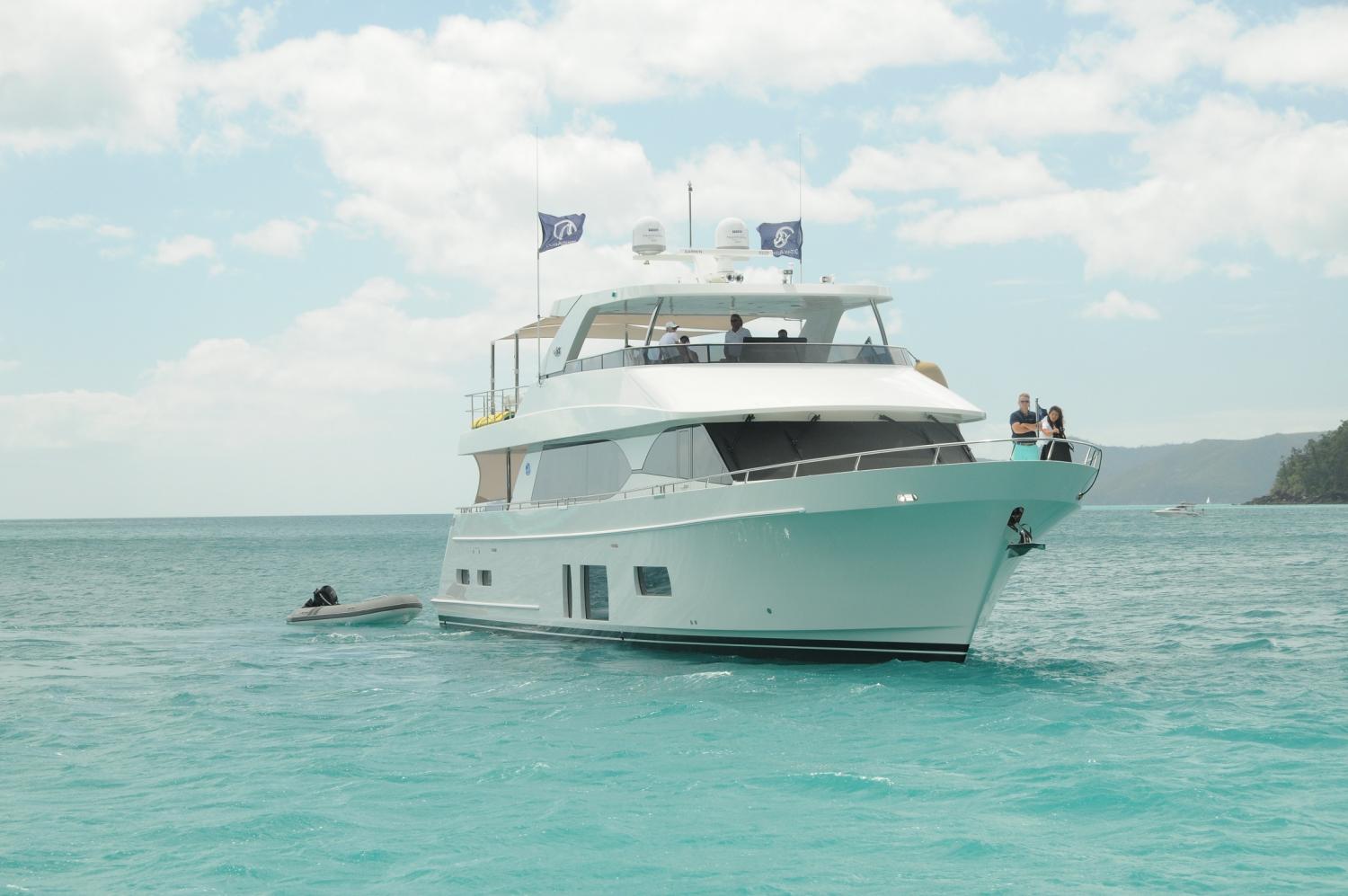 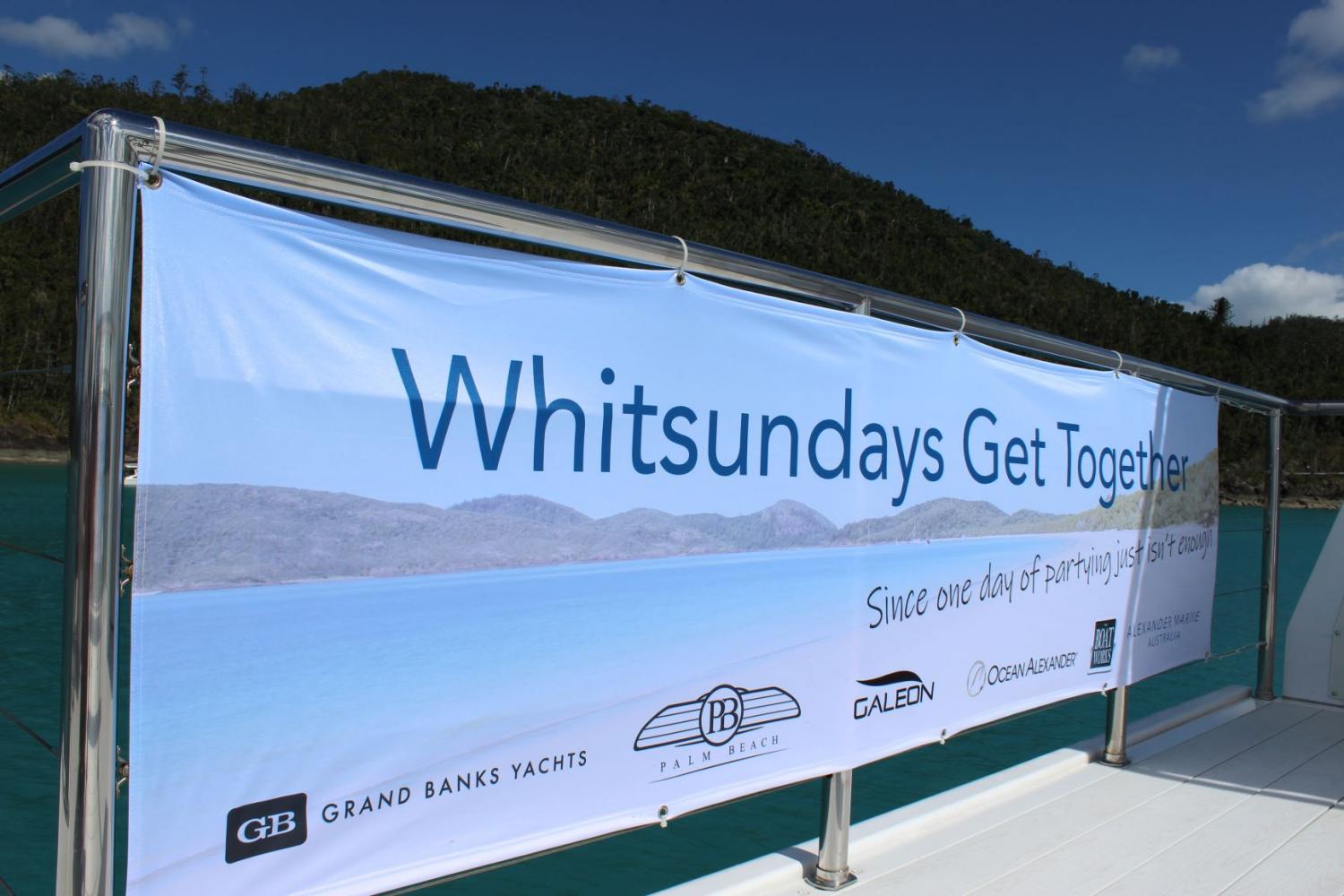 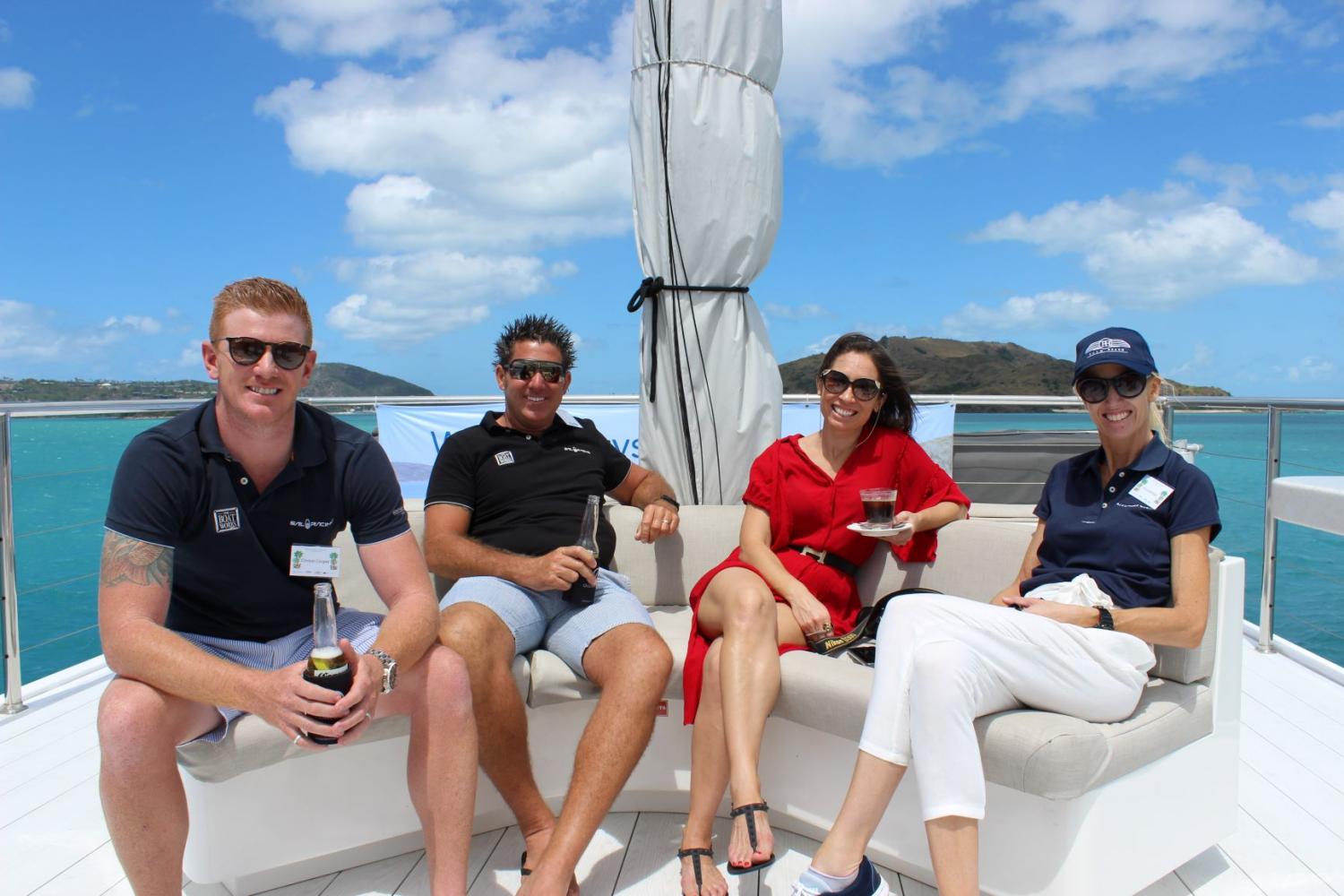 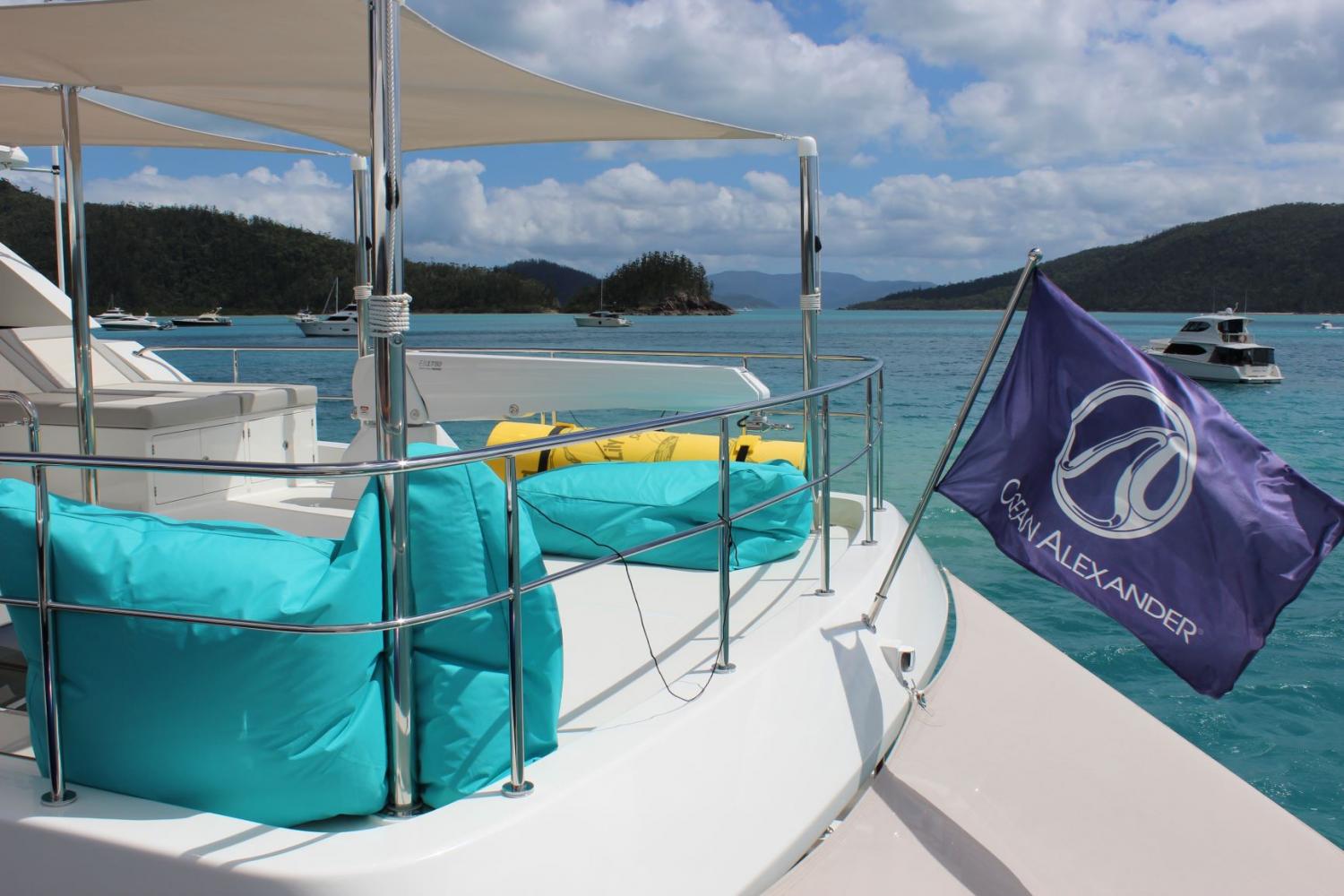 A precursor to a sensational summer of boating, Alexander Marine Australia welcomed 80 owners and their family and friends to the tropical surrounds of Hamilton Island for their annual – this year being the first multi day event - Whitsundays Get Together.

Set against the sublime backdrop of the jewel in the crown of the Whitsundays and Great Barrier Reef, the fun, fabulous three-day festivities took full advantage of the island vibe, kicking off on Friday 21 September with a cocktail party at the brilliantly situated Keel Deck beneath the famous Bommie Bar at the spectacular Hamilton Yacht Club.

As the sun set in picture-post-card hues of orange and pink, guests mingled and surrendered to the laid-back pace of ‘Hamo’, with canapes and cocktails or cool ales to quench collective thirsts and classic tunes from the 5-piece live band, ‘Rock Bottom’ enlivened the festivities.

Of interest to guests was the collection of Grand Banks, Palm Beach and Ocean Alexander vessels glistening at the marina and visible from the Keel Deck as the sunset deepened – the ultimate backdrop for these avid boaties.

Formally commencing the event, Todd Holzapfel, Dealer Principal, welcomed guests, who had travelled from Melbourne, Sydney, Adelaide, Brisbane, Townsville and the Gold Coast for the rendezvous. Todd thanked them for their loyalty and enthusiasm for boating, with all the camaraderie, lifestyle benefits and memories of a lifetime it brings.

“This event is about getting to know each other, enjoying time together, renewing ties and making new friendships – all of us united in our love of the on-water lifestyle,” he said.

“We are passionate and proud of the new boat brands we represent: Ocean Alexander, Grand Banks, Palm Beach and Galeon, and we love to share our experiences, enriching each other in the process. Remembering our expertise extends to offering for sale a wide collection of beautiful brokerage motor yacht options that we can match to specific buyers.”

As darkness fell, guests gravitated to the dance floor and in true Alexander Marine-style, the party continued for many hours, the sultry sounds of the ‘Rock Bottom’ band elevating the mood and draining the stamina! The lead singer of the band is himself the owner of a flagship Grand Banks.

On Saturday, after a well-earned sleep-in (rumour has it that a few people needed a quiet morning), guests were free to explore the onshore attractions of Hamilton Island – such as the wildlife park, golf course, myriad boutiques, restaurants and galleries. Todd and his wife Samantha, with their two beautiful girls, Eloise and Giselle, hosted a casual afternoon soiree at their villa on the northern side of the marina overlooking the assembled Alexander Marine Australia fleet.

Over succulent seafood and Piper-Heidsieck champagne, conversations turned to plans for summer boating. Many owners revealed they were planning ‘Bucket List’ voyages, such as Sydney Harbour for New Year’s Eve, the Tasmanian west coast and the Whitsundays – a veritable playground for boaties, particularly over the winter cruising season. Needless to say, this was a gathering of genuine bluewater boat owners with extensive cruising experience.

Some owners, many on their second and third boats purchased through Alexander Marine Australia, were eager to share how boating changed their lives, opening up an entirely new and vibrant world of experiences, adventure and friendship.

“We owned the baby of the Grand Banks fleet,” said Julie, a Lismore-based owner whose current Grand Banks ‘Valentine’ is berthed at Hope Harbour Marina on the Gold Coast. “Then we moved up to a larger model and we’re constantly amazed at the wonderful people we meet and the incredible places we travel.

“We usually go out with our regular ‘boating buddies’. It’s no exaggeration to say our boat has changed our lives, and for the better.”

‘Valentine’ made the cruise north to the Whitsundays for last year’s event, and she is booked into Hamilton Island Marina for the 2019 season, confirmed to participate in next year’s Alexander Marine Australia Whitsundays Get Together.

The main event took place on Sunday 23 September, the much-anticipated raft up comprising the trideck charter catamaran, MV Hamilton Star, and the new Ocean Alexander 85 – an ocean-going superyacht and the ultimate entertainer. The OA85 boasts the perfect socialising setup, including a massive top deck with bar, dinette, sun pads and bean bags. Several owners’ boats joined in, including elegant Palm Beach Motor Yachts which looked every inch at home on the azure waters.

Making the short jaunt to Cid Harbour, under clear skies and buoyed by a hearty breeze gusting between the islands, the Alexander Marine flotilla dropped anchor at what is surely the most picturesque bay in the region.

Thanks to the indefatigable band, a soundtrack of summer tunes set the mood and guests shimmied between vessels, savouring delectable cuisine and scintillating company.

Some southerners announced they planned to take a dip, a risky decision given the drumlines in place and the occasional presence of Fisheries Queensland boats. But they were soon persuaded to enjoy instead a trip to shore aboard the sleek and stylish SACS Strider 13 super-tender, the official transfer vessel for the event, and dip a toe in the shallows or explore the beach.

“We’re new to boating and our kids just can’t get enough,” said the keen Melbourne owner of a recently delivered Palm Beach 42 Sedan. “Any opportunity to swim and island hop and they’re onboard! It’s great to meet other boaties who have been doing it forever and get their advice on some great family destinations.”

Two seasoned boaties, a couple from Brisbane, are on an extended journey to the Whitsundays and Reef. One place they mentioned and well worth a visit was Percy Island and its main attraction, Andy’s Hut.

“It’s a convenient spot to pull in on the north-south route,” they explained, “but it’s also got load of character and history. Set among the coconut palms is a rustic A-frame hut. Boaties from every era have left keepsakes there – mementos off their own boats or items from their travels.

“We looked for items that we left there many years back, but we couldn’t see them – they’re probably buried under so many fascinating things. It makes you realise the passage of time and that life is precious. We all need to be reminded of what matters in life.”

Onboard the impressive Ocean Alexander 85, the talented ‘mixologist’ worked his magic from the business side of the huge flybridge bar concocting peach-coloured potions for the ladies and the sailor’s favourite, rum and tonic for the gents.

Conversation flowed, tall tales and true, about cruising experiences, boating ambitions and business backgrounds. Boating is always worthwhile for the subtle networking that can be done when you discover the sunburnt bloke in the floral shirt, flip flops and comical hat is a titan of industry!

Those impressed with the Ocean Alexander 85 were interested to hear that Ocean Alexander will debut its new 90R (R for “Revolution”) model at this year’s Fort Lauderdale Boat Show – the first in a new series of Revolution models to complement the existing model range.

The 90R boasts the increasingly popular plumb bow design and features an on-deck master layout. The details of various new Ocean Alexander models are pending public announcement in the months ahead, testament to the prowess and productivity of the acclaimed design team and expanded production facilities at Ocean Alexanders’ Taiwan and Florida facilities.

Founded on Sydney’s northern beaches in 1995 by seven-time Sydney to Hobart race winner Mark “Ricko” Richards, PBMY are in demand by yachting connoisseurs globally for their classic lines, craftsmanship and customisation.

According to Skeet, it started with the concept of the ideal boat to take you from Palm Beach to Point Piper in all kinds of conditions. “Ricko said for seaworthiness and style it could only be a Maine lobster boat, and thus, the legend was born!”

One owner, on his third Palm Beach, a PB65 called ‘Triple Treat’, described the marque as “the boater’s boat”.

“We had a 50, then a 55 and now a 65. I used to race yachts against Ricko and just admired everything about the timeless beauty of the Palm Beach.”

Next on the agenda for the iconic brand is the launch of the PB70, the first of which is destined for San Diego.

Like previous models, the PB70 is built on a semi-displacement warped-hull design that produces less resistance to achieve planing mode, additional buoyancy aft and a shallow draft which means this serious cruising motor yacht is fit to undertake bluewater passages and explore remote reaches. Equipped with the standard twin Volvo IPS 1350 engines, it’s estimated to achieve a top speed of 38 knots.

Construction is well underway on the new flagship for a scheduled completion at the end of 2018, with the first two hulls sold. The PB70 will no doubt strike a chord with the European market when it’s shown at the Cannes Yachting Festival in September 2019.

Another “first” for Alexander Marine Australia scheduled for early 2019 will enervate the Aussie boating scene – the introduction of Polish-built brand, Galeon Yachts.

As Todd Holzapfel explains: “We are looking forward to presenting the 460 and 510 models which we have purchased for stock, complementing the other new boat brands we sell and specifically the Ocean Alexander range, which starts at 70-feet.

“Galeon motor yachts are totally unique and exceptionally innovative. With 30 years of boat building experience, embracing the designs of leading naval architects such as Tony Castro and Roberto Curtò, the Galeon product range offer unique features such as the fold down aft side balconies and supersized sliding glass panels not seen on vessels in this class.

“We’re sure the Australian boating public will take notice of Galeon when these new models arrive on our shores.”

As the sun set on a superb day, replete with colourful characters and camaraderie, the value of such occasions was expressed in the feedback from guests.

“We need to take time to unwind! You can’t do that at home . . . there’s always something to do,” said one contented owner. “Only a boat can force you to slow down and smell the roses, or in this case, the rosé!”

“We found we only got to know our kids when we started boating,” said another. “They’ve discovered there’s more to do than just locking themselves in their rooms with devices. They’re more relaxed and we are too.”

“There are no bad boaties,” asserted one cheerful soul. “We don’t need to talk about politics or world events, what’s worrying you in life. It’s a great escape! it’s all about places we’ve been or want to go to, and all the fun and best times in life. How can you go wrong?”

The final word belongs to the host of proceedings, Todd Holzapfel and his loyal, multi-talented team.

“The value of these events is in the friendships formed. Boat shows can be impersonal. A get together in the perfect boating destination like Hamilton Island, with like-minded people, all different backgrounds and personalities, is the perfect place to experience the boating lifestyle – whatever form that takes for each person.

“For some, it’s meeting new people, getting tips or dreaming about a new boat. For others, it’s finding a quiet place to doze off. For many of us, it’s eating, drinking and dancing the night away!”

And so, as the blush of evening blended into a blanket of dazzling stars, and those guests fatigued by sun or sangria returned to Hamo onboard the MV ‘Hamilton Star’, the party continued aboard the Ocean Alexander 85, boosted by a spontaneous acoustic performance by the band on the flybridge of the 85.

To see the full photo album of this year's Get Together, visit the Alexander Marine Facebook page.